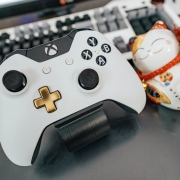 PC games have gained immense popularity in the recent years, and definitely for all the good reason. Mobile gaming is definitely at the top of its game, like always, but the thrill of playing on a console is unbeatable. 2020, is the year for the spread of corona virus and almost the entire world has stayed indoors for half a year. This has changed the gaming dynamics and the list of the best PC games has been reshuffled.

It is an excellent action game that is produced by the Tic Toc Games’ Adventures. It comprises the pixel bits of 1 to 16 bit and toggles between them. This game consists of rich environments, with a unique premise and fun gameplay. Despite the defined course of its weapons, power-ups and other features, it is still considered the best PC game of 2020.

This is the extended version of the game Batman: Arkham Asylum. It is developed by the RockSteady Studios and most of the game’s features are borrowed from the Batman: Arkham Asylum. It consists of thrilling features and an excellent voice acting. However, the major drawback is that the innovation has been highly diminished due to its copied features from the Asylum. Despite the few drawbacks, it is still considered as one of the best PC games in 2020.

It is developed by JoyMash and is considered as one of the best run and gun shooter games. The game comprises of a lot of interesting features like the robot apocalypse, and a world with terminators. The game also is enriched with fulfilled features to obliterate the mechanical enemies. The game consists of roughly six stages, where the player can experience explosions and some multiplayer thrilling actions. Although the game does not really hold all the interesting features, it still manages to stay on top of our list of the best games.

This game is developed from the Contra series and is one of the charming running and shooting games in the channels of Konami’s iconic series. This game also takes inspiration from the rubber-hose style of animations that were famous during the 19’s era of cartoons. The Contra series is famous for their faced-paced gameplay and anyone who loves these games will definitely fall in love with Cuphead. It consists of the protagonist and his brother named Mugman, who are on the hunt to fight against their bosses and complete their quest. This is an extremely simple game as it does not follow the expensive features and designs, however they’re famous or their action games and their brief complexity. The boss fights are also compared to the alien solders’ boss fighting games.